Day 1 – Windhoek – Etosha Park:
We recommend leaving Windhoek early this morning as you have a 435km drive to complete before reaching the park. Your route takes you due north of Windhoek via the towns of Okahandja, Otjiwarongo and finally Outjo (a popular lunch stop – before the final drive into the park). You will enter Etosha at the Anderson Gate from where it is only a short drive to Okaukuejo. The chances are that immediately on entering the national park you will start to see interesting wildlife – so covering even the shortest distance can be a rewarding and time consuming business.
Do remember that you have to be inside the Okaukuejo gates before sunset. As darkness descends you can make your way to the spot-lit waterhole and watch the animals come down to drink. This waterhole is frequently visited by rhino & elephant as well as numerous smaller nocturnal game species.

Day 2 & 3 – Etosha Park:
It is really worth waking early and heading out on your game drive as soon as the gates open at sunrise. Animals are most active in the cool of the day (early morning & late afternoon) and in order to maximise your chances of good viewings it is worth imitating their behaviour. The roads in Etosha are unsealed gravel roads but are in reasonable condition – and the general tourist behaviour is to drive between various waterholes searching for animals.

As the day gets hotter head for shade, and lunch, at one of the parks three camps, Okaukuejo, Namutoni or Halali. When things start to cool down again head out for another game drive. With two full days in the park you should have sightings of most of the parks inhabitants (although be warned the cats are notoriously hard to find – and of course what you see is determined by luck and more importantly your ability to spot wildlife)
These two nights accommodation are at a comfortable lodge on the eastern outskirts of the park. From here is is only a short drive into the park and an added benefit of staying here is the option to book one of the lodges guided game drives into the park.

Day 4 – Etosha to Windhoek:
There is time for a last game drive this morning before you need to head back towards Windhoek. Drive via the towns of Tsumeb (just north of the town is the Otjikoto Lake which is worthy of a short visit) & Otavi before rejoining the route you used while travelling north in the town of Otjiwarongo. Whichever route you decide to use, do stop at one of the wood carving markets in Okahandja as this is the best place to purchase Namibian wood carvings.

With its wide-open spaces of the Namib desert, the huge sand dunes at Sossusvlei, the desert elephant and rhino that may be seen in the Damaraland area, Namibia possesses some of the most stunning landscapes in Africa and is home to greatest road adventures in Africa. Natural wonders such as that mighty gash in the earth at Fish River Canyon and the wildlife utopia of Etosha National Park enthrall, but it’s the lonely desert roads where mighty slabs of granite rise out of swirling desert sands that will sear themselves in your mind. It’s like a coffee-table book come to life as sand dunes in the world’s oldest desert meet the crashing rollers along the wild Atlantic coast. Among all this is a German legacy evident in the cuisine and art nouveau architecture, and in festivals such as Windhoek’s legendary Oktoberfest.

Namibia boasts remarkable natural attractions such as the Namib desert, the Fish River Canyon Park, Etosha National Park and the Kalahari desert. Its people speak nine different languages, including some of the Khoisan languages which include the ‘clicks’ that present an enigma to most native English-speakers. Namibia produces some of the world’s highest quality diamonds.

Previously known as South West Africa, Namibia is bordered by South Africa in the south, Angola and Zambia in the north and Botswana and Zimbabwe in the east. The country is demarcated into 14 regions, namely the Zambezi, Kavango East, Kavango West, Kunene, Omusati, Ohangwena, Oshana and Oshikoto regions in the north, the Omaheke. As Namibia is such a vast country, it makes sense to travel via scheduled air charters if possible.

Namibia’s Tourist Attractions
Namibia boasts remarkable natural attractions such as the Namib desert, the Fish River Canyon Park, Etosha National Park, the Kalahari desert, the huge sand dunes at Sossusvlei, the desert elephant and rhino that may be seen in the Damaraland area. Natural wonders such as that mighty gash in the earth at Fish River Canyon and the wildlife utopia of Etosha National Park enthrall, but it’s the lonely desert roads where mighty slabs of granite rise out of swirling desert sands that will sear themselves in your mind. 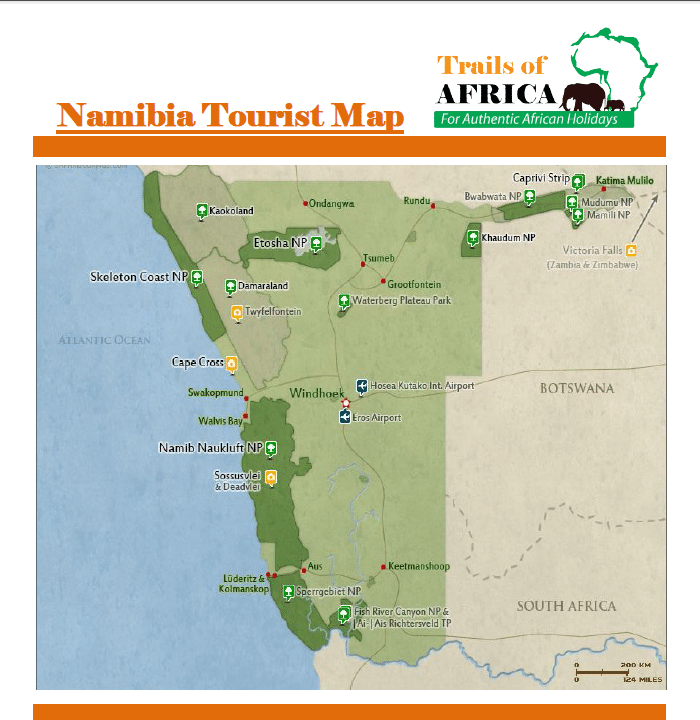